A special school in Mansfield is dreaming of playing at Lord’s, ‘the home of cricket’, after lifting the first trophy of the season.

Fountaindale was one of nine teams from around the county and beyond to compete in our Table Cricket tournament held at Nottingham Trent University. They beat Ambergate, from Grantham, in the final.

The event was organised by the Trust in association with Lord’s Taverners and Nottinghamshire County Cricket Board.

Games are played on a converted table tennis table so even youngsters in chairs can participate. Side panels and sliding fielders are placed around the table to create an arena, a small ball and ramp are used to bowl, and a bat enables players to score runs, simulating a
game of cricket.

The schools took part in a five week coaching programme led by our chief executive and head coach Darren Bicknell and his team in preparation for the tournament.

Fountaindale will now compete in the regional tournament with the chance of flying the flag for the East Midlands in the national finals at Lord’s, a feat achieved by another Mansfield special needs school, Beech Academy, in 2017. 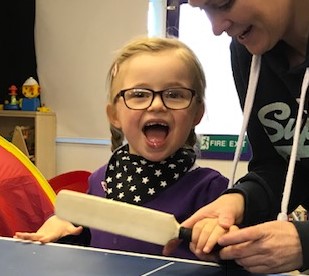 Darren said: “It’s all about giving youngsters with disabilities the chance to participate in sport and play competitively.

“Each team played group and play-off matches and all 75 children had a fantastic day and were presented with a Lord Taverner’s signed certificate. They did their schools proud.”

In all the Trust has worked with around 180 children at 11 special needs schools this year.
The schools are also invited to spend a day on the Belvoir Estate in the summer to play Kwik Cricket and take part in a range of countryside education activities such as flying the birds of prey, having a go at fishing and meeting working dogs and horses.